An international meeting on the subject, “Western Sahara – Referendum NOW!
– promoting the Political Process” took place in Berlin on December 12th and 13th , 2014. It was attended by76 representatives from civil society organizations and single individuals coming from Algeria, Germany, Great Britain, Norway, Austria, Poland, Sweden, Switzerland and Spain. Speakers, such as Aminatou Haidar, the renowned Sahrawi activist for human rights, Santiago A. Canton, Executive Director of RFK Partners for Human Rights at the Robert F. Kennedy Center, contributed to a successful conference, as much as Mohamed Sidati (Polisario representative to Europe), Norbert Neuser (Speaker of Western Sahara Intergroup at the EU Parliament) and statements from Christian Weber (President of Bremen Parliament) and Kerstin Tack (member of Deutsche Bundestag/SPD).

Two reasons stood for this event: the up-coming 130th anniversary of the so-called Congo conference (Berlin conference) on February 26th and the 40th anniversary of the Madrid Agreement of 14th November 2015. The Western Sahara conflict has decisive consequences on these two dates that justify the colonialism of these contracts: As a result Western Sahara remains the last colony of Africa being occupied against international law, despite the fact that South Africa and Namibia got their liberation/ independence 25 years ago. This fact is strongly underlined in the written greeting message by the Namibian Ambassador to Germany, H.E. Neville Gertze.

Participants discussed with the speakers as well as in workshops about the actual international fields of conflict in regard to the Western Sahara question. The following key political demands have been fixed:

The participants finished by adopting a plan of action which should serve as a frame for 2015 and which will be integrated in their net works.

The participants expect that the stipulated demands mentioned above will be followed by all political levels to reach the referendum.

It is explicitly requested from the EU and the national governments to give up their ‘neutrality’ and to search actively for a solution of the conflict in the sense of international humanitarian law. The membership of Spain as a member to the UN Security Council as of January 2015 and the lead of the UN human rights council (UNHRC) in 2015 by Germany should expand the scope of action in this sense.

Participants welcome the decisions of the European Parliament about the continuity of the ‘Intergroup Western Sahara’. They expect the Intergroup to actively follow EU politics in Western Sahara and to organize an active exchange with national parliaments, the Panafrican Parliament (PAP) and the UN as well as NGOs during this legislative period. As a suitable frame it is proposed to call for a hearing on the EU Western Sahara politics.

The conference demands also from members of national parliaments and committees to request public hearings and parliamentary resolutions from their national governments, in order to support actively a solution of the Western Sahara conflict in the meaning of international human law.

It was followed with great interest that in 2014 a visit took place into the occupied territory by British parliamentarians, focusing on human rights violations. Furthermore, Denmark succeeded in obtaining a parliamentary resolution to support the referendum.
The Swedish Parliament supports the recognition of DARS. Such successes should give example to other countries.

The participants hope for continuation and expansion of humanitarian aid for the Sahrawi people, which are existent on many regional and municipal levels throughout various European countries and this since decades.

It is demanded by the participants that NGOs increase political pressure on decision makers within the EU and the member states and this in close cooperation with the parliamentarians.

The participants of the conference want to be continuously active in the actual fields of conflict and wish to better network their activities. The following action emphasis is proposed:

As seen by the participants a support of the Saharawi can be successful in multiple ways and different approaches should be tried out and possibly multiplied. Science research, cultural activities and critical tourism can bring forward an involvement of the public on the Western Sahara cause. Anniversaries as the Congo (Berlin) conference (26th February 1885), the Madrid Agreement (14th November 1975) and the founding of the Democratic Arab Republic Sahara (DARS) of 27th February 1976 offer excellent occasions. 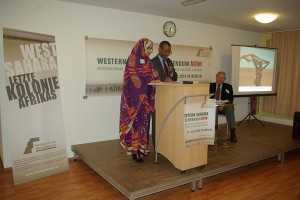 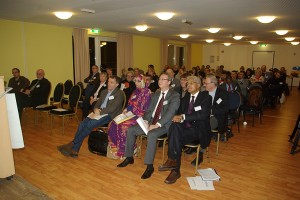